The 13th Parachute Battalion had been tasked with securing the area around Drop Zone ‘N’ and the River Orme (Horsa) bridge and Caen Canal (Pegasus) bridge that were captured in a coup-de-main by a glider-borne force from the Oxfordshire and Buckinghamshire Light Infantry. The battalion also had to secure the town of Ranville.

On 1 August KG 355 returned again with supplies and brought out more wounded.

KG 355’s story is told from the records
and photos of Lew Dodgson, Bill Budden and Noel Headifen. 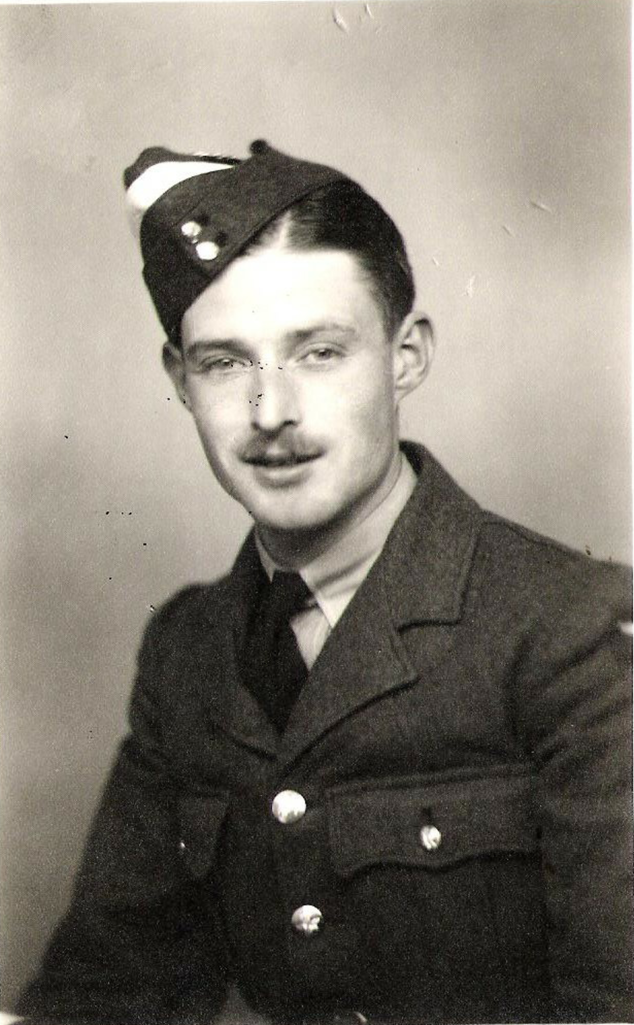 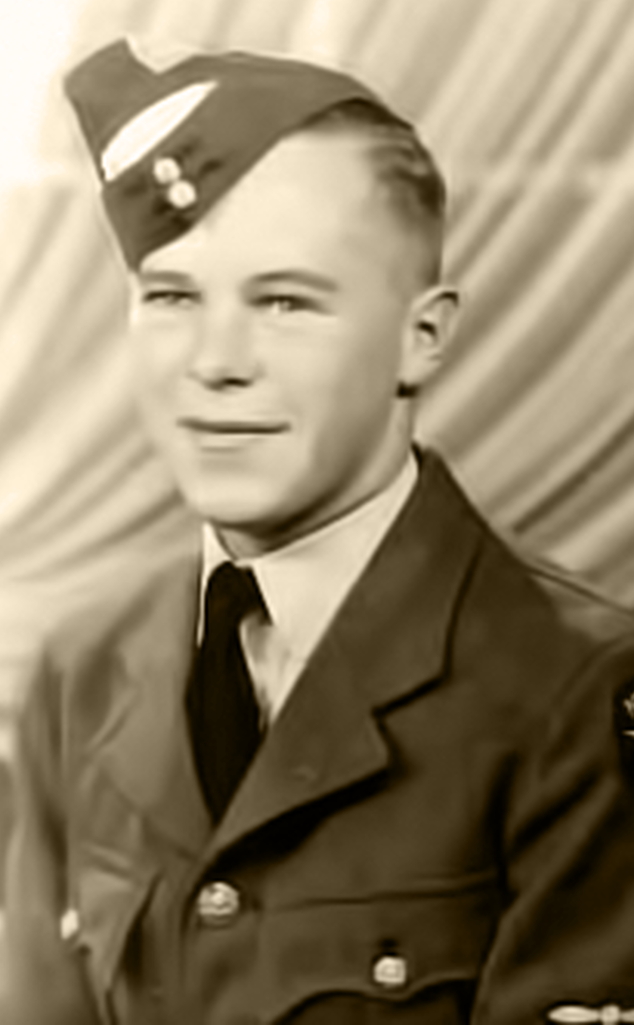 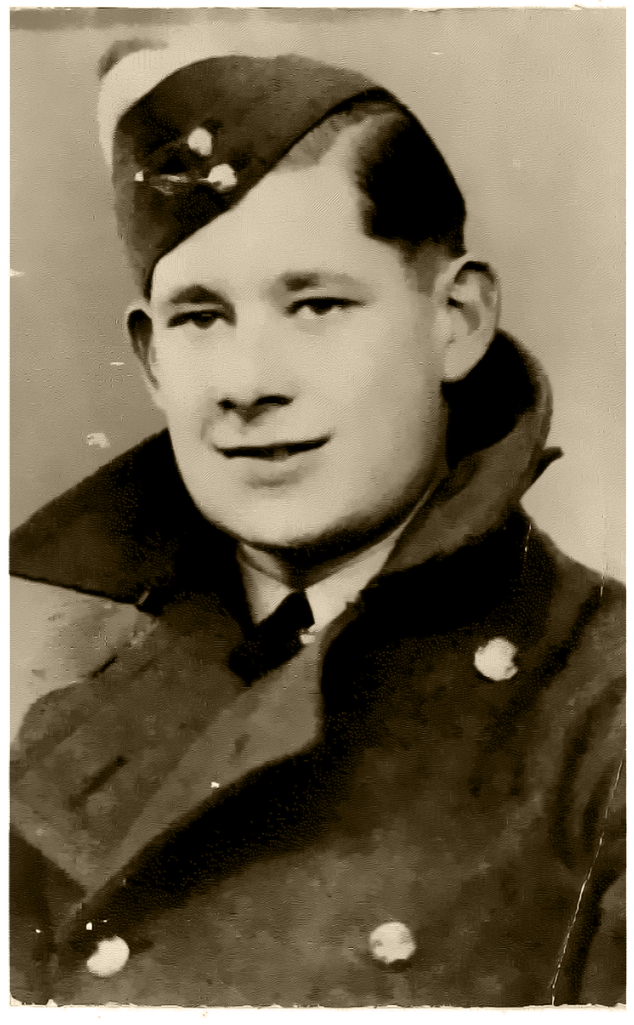 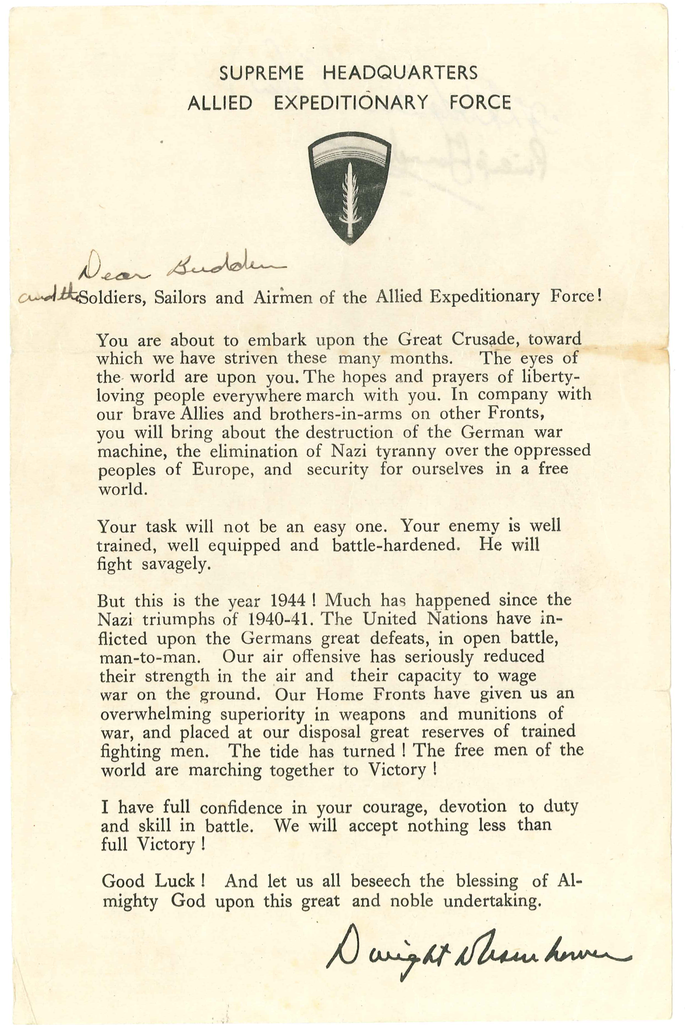 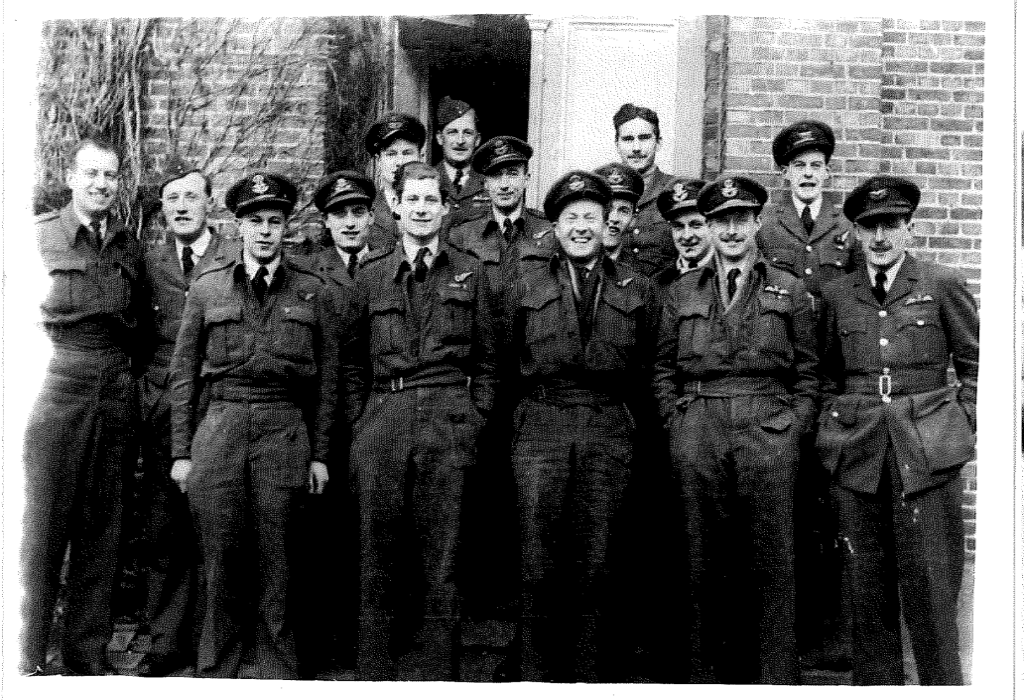 Map of the Operation Tonga area 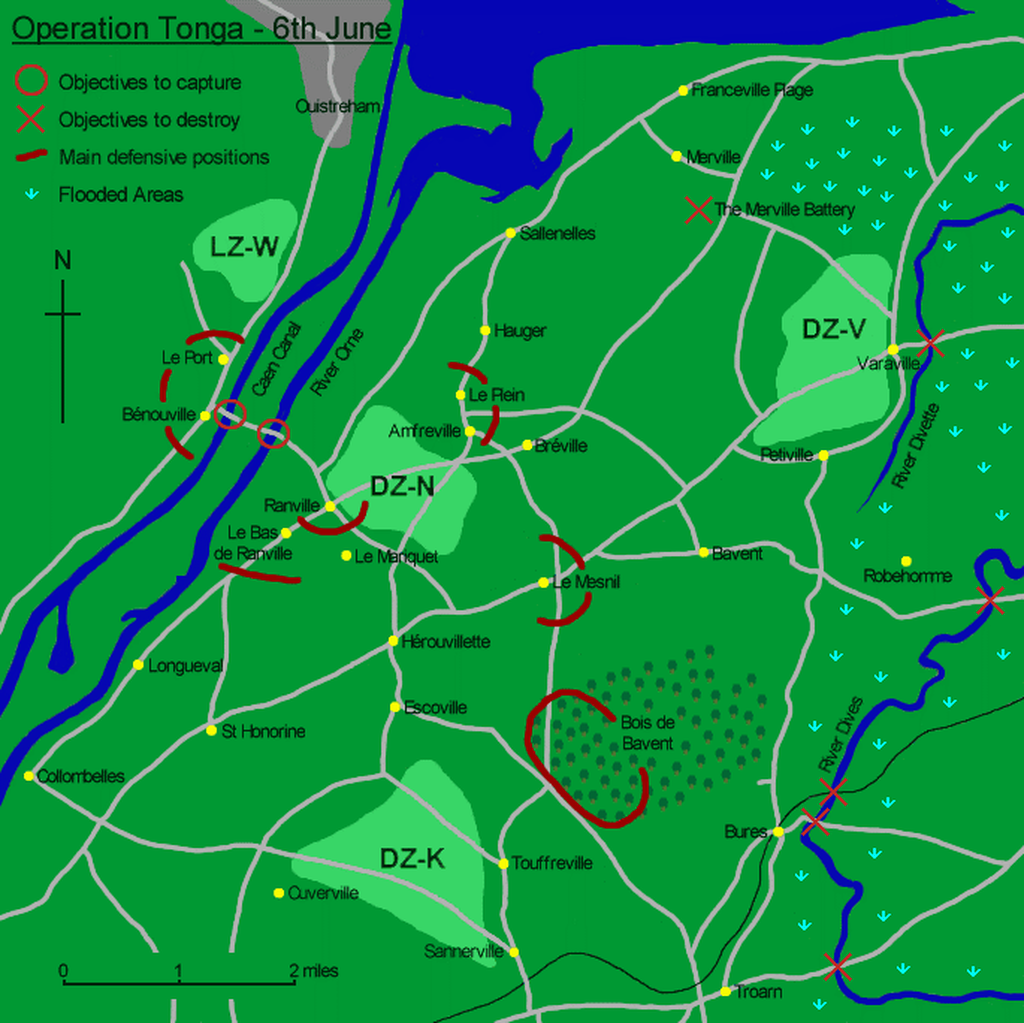 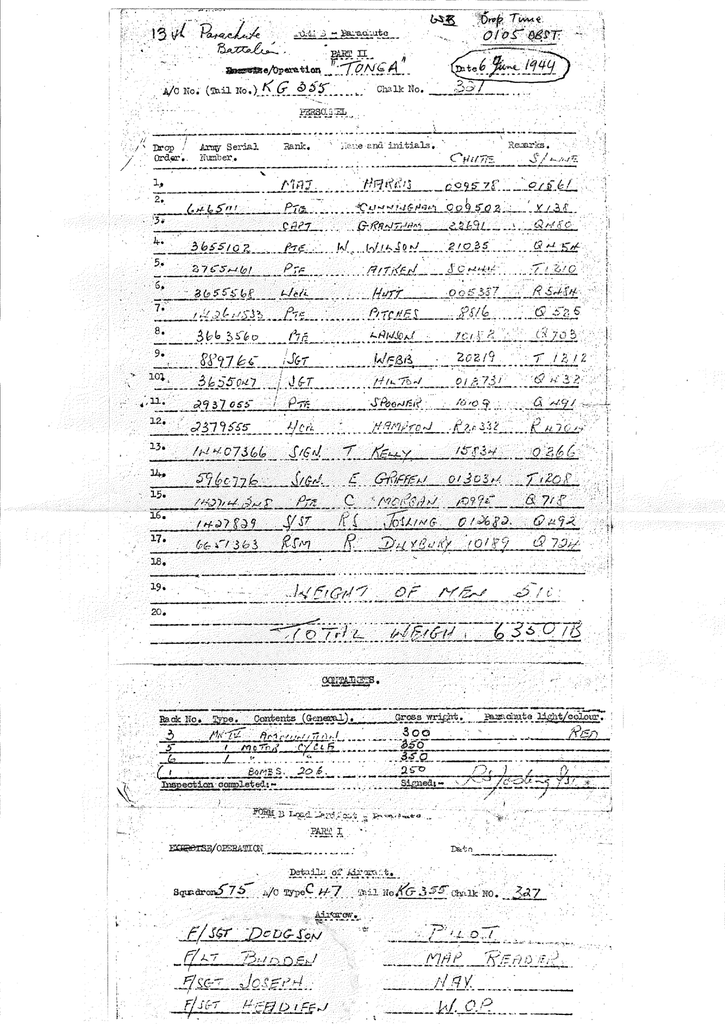 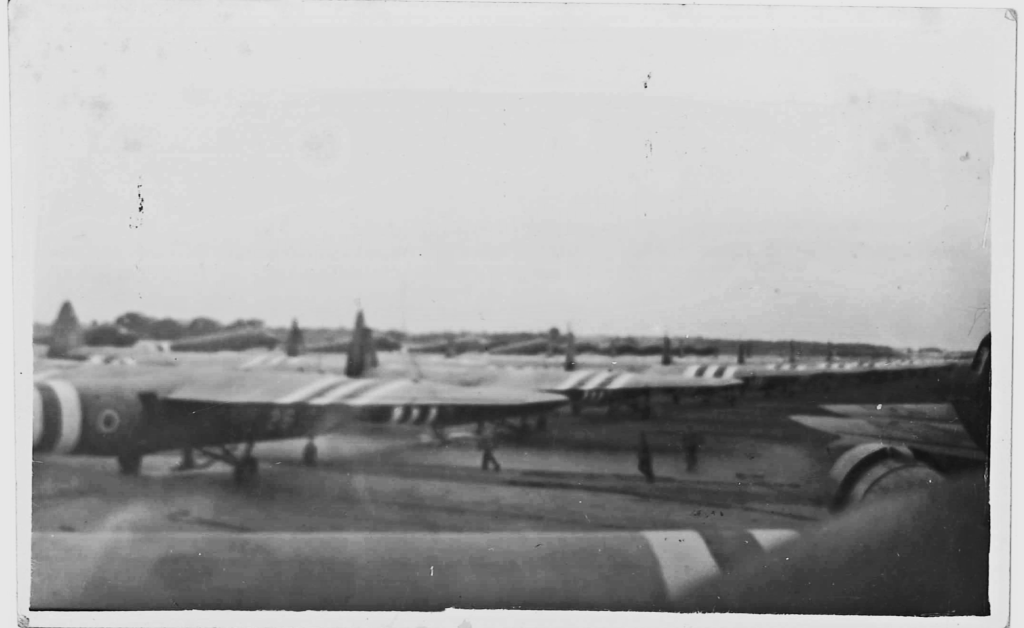 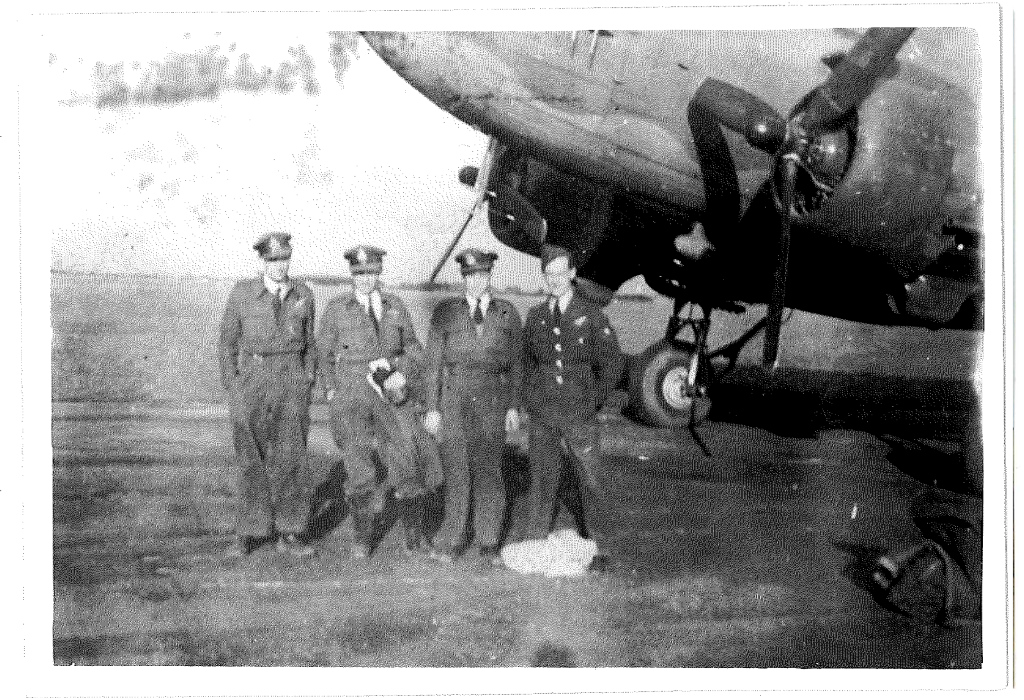 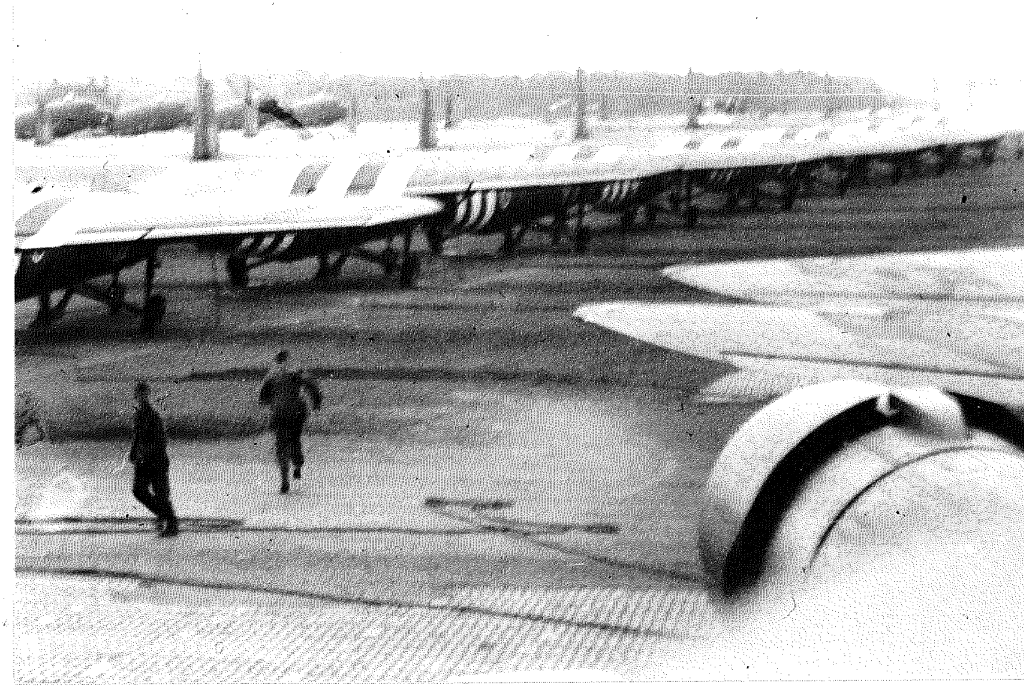 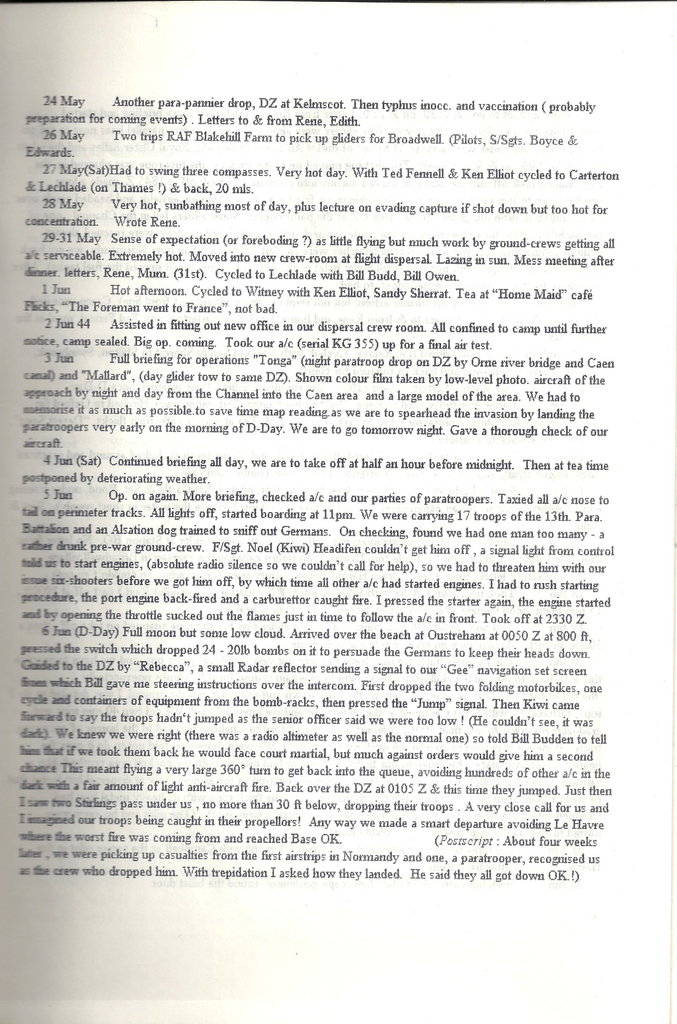 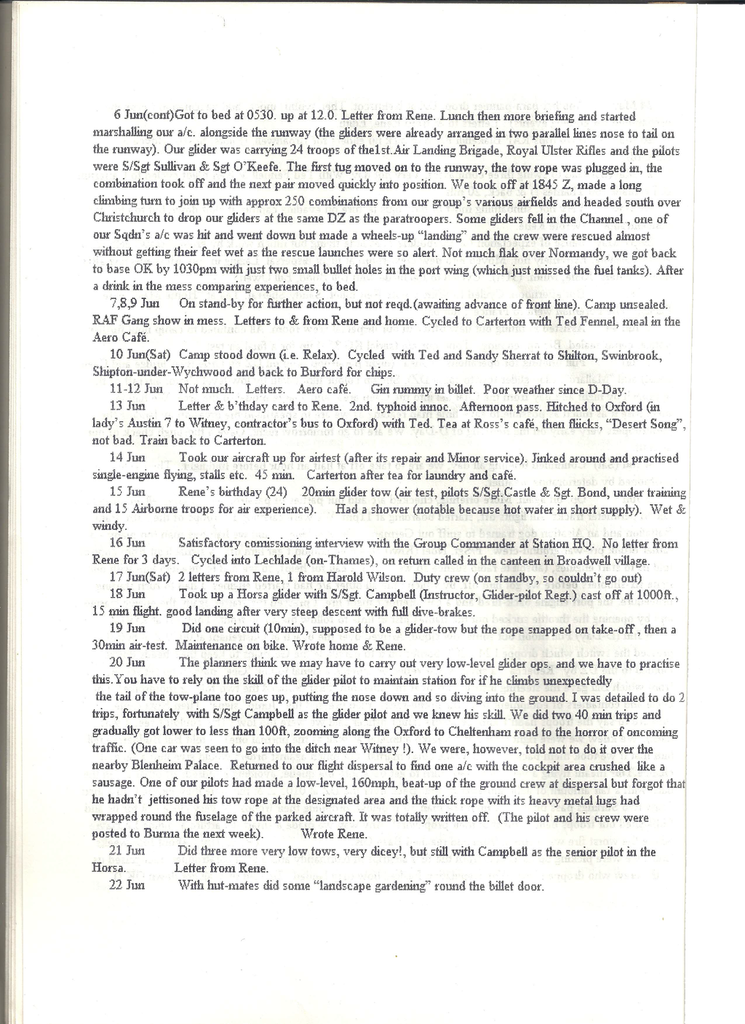 On 2nd March 1944 I arrived at 575 Squadron, Broadwell near Burford in Oxfordshire and joined a crew with Flt/Sgt Lew Dodgson and Flt/Sgt Noel Headifen. We flew in Dougles DC3 Dakotas.

On 6th June ‘D’ day we dropped 17 paratroops and their equipment at a bridge across the river at Ranville, Northern France, one bridge East of the famous Pegasus bridge. We were delayed in take-off because a drunken Warrant Officer climbed our steps and demanded to go with us, with no parachute, he just did not want to miss the show ! All seemed to be going well, we were flying in tight formation at about 1500 feet coming down to 600 for the drop. There was light anti-aircraft fire. I map read OK to the Dropping Zone at 600 feet and gave the troops the green light to bale out. The Major in command said that we were too high and must go back over the sea and come in at the correct height so this we did. I was the senior RAF officer on board and knew our height was correct because I was checking all the time but there was no room to argue and by that time the anti-aircraft guns were firing away, It meant climbing and weaving our way through all the other aircraft, going back to the coast and returning, They dropped on the second attempt but it was dicey ! By then the enemy had woken up and conditions had deteriorated.

I did not criticise the Major for being wrong, it was his and his troop lives at stake. We returned safely and went to bed worrying how our troops were faring in the battle for the bridge. I have their names in my log book but no info as to who returned safely. The sea crossing was accompanied by an almost total covering of boats of all types and quite an array of aircraft.

At 18.45 the same day we towed a Horsa glider across to the same dropping zone. It was then daylight and we could see activity on the ground from 660 feet but we learned later that the other bridge had been captured by Major Howard and a troop of glider troops who had landed right at the side of the bridge.

From that day on opposition from the German Army was so fierce, and the weather so bad that we could not return until 10th July when we flew in to Ranville, landed on a grass strip and brought out 23 wounded. We had been fitted out with 3 layers of stretchers and had a bevy of WAAF nurses to do this. It was August 1st before we were able to return with supplies and bring out more wounded.

Lew, Bill and Noel flew together many times and in September 1944
took part in Operation Market Garden (Arnhem). 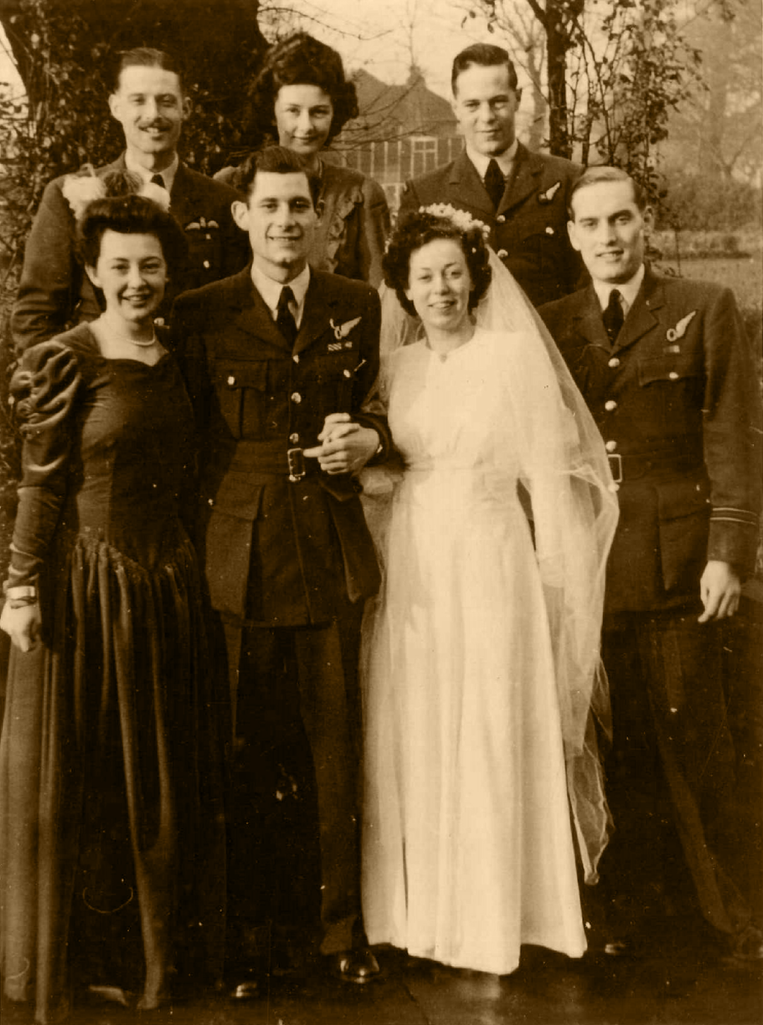 In December 1944 Lew and his wife Rene and Noel were guests at Bill’s wedding to Vera Shepherd. Bill and Vera had met at RAF Beaulieu where Vera was a WAAF.

Noel, Bill Owen and Lew (L to R) enjoying a drink and a joke after the wedding 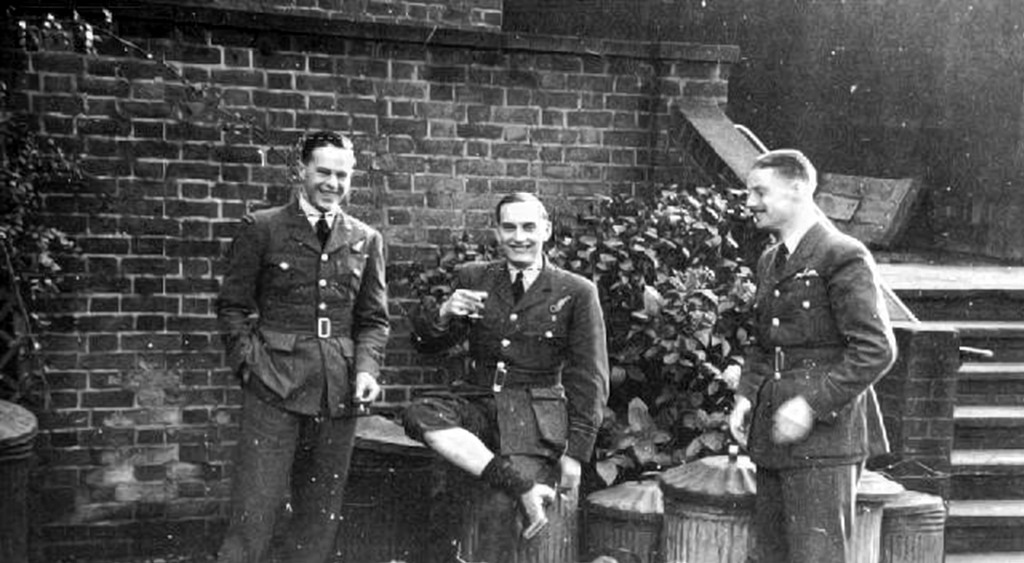 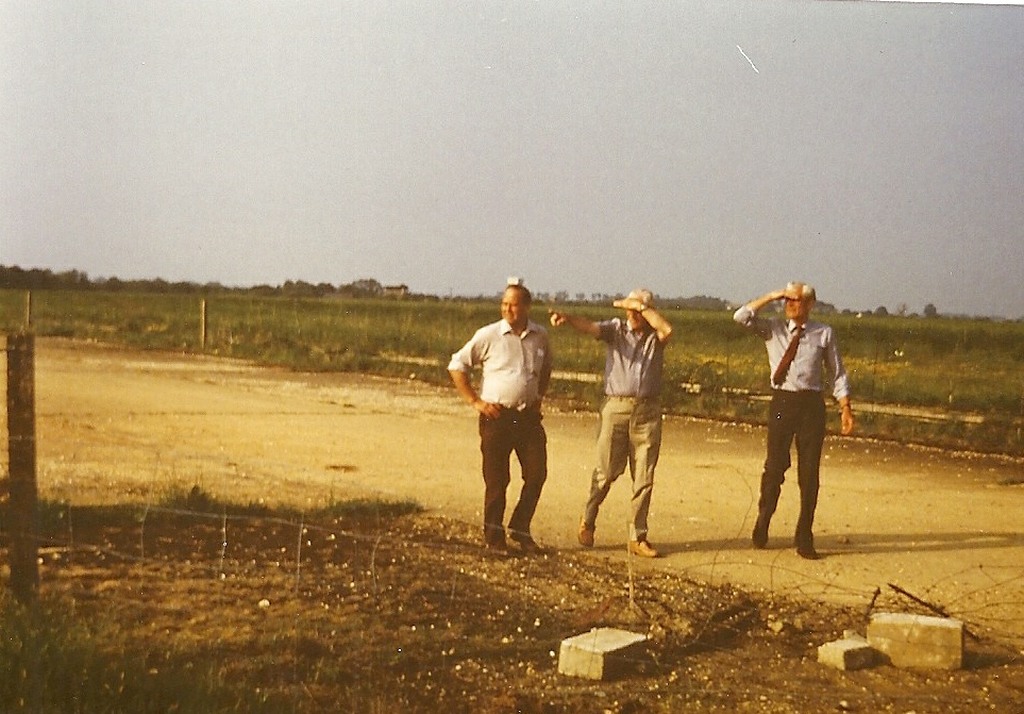 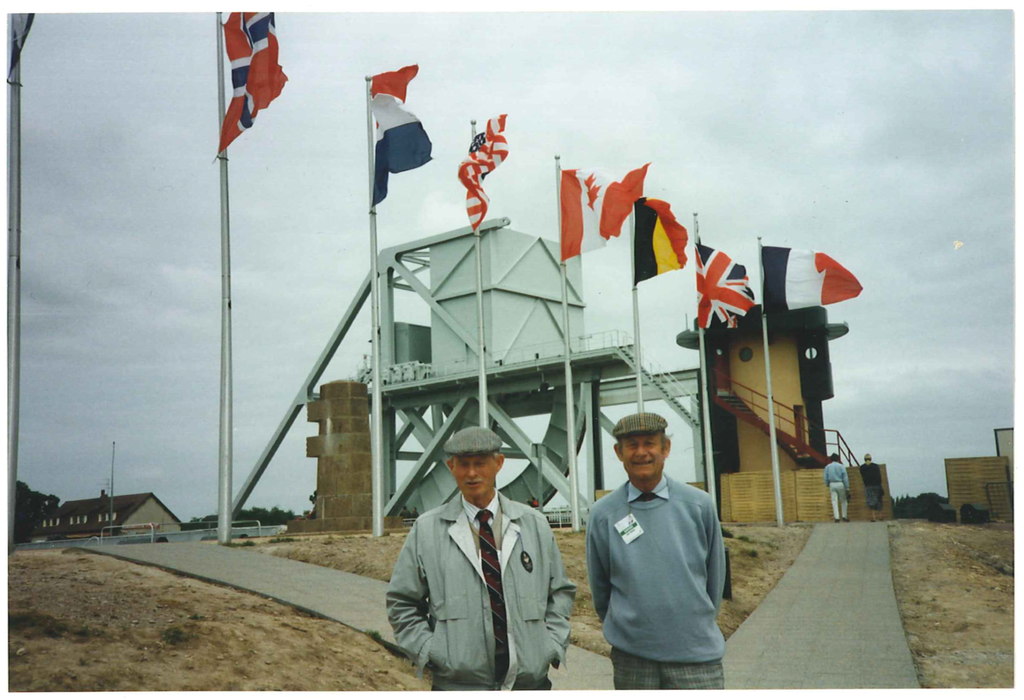 On 50th anniversary of ‘D’ day Lew and I went back to Bayeux for a service in the War Cemetery attended by the Queen and heads of almost all the allied governments involved in the war.
I talked to a heavily decorated Australian Air Gunner at the grave of his colleague and he introduced me to the Australian Prime Minister.

We were waiting at the entrance to the Cathedral for the Queen and others to enter and a small group of old men marched past. They were from Bridport, (Bill’s home town) led by my friend Bob Collins !

Large crowds of French families lined the route and waved and clapped as we old men achieved a very ragged march past ! It was one of those memorable days. But seeing the fields of white crosses was sad. The dignitaries went on to a banquet but Lew and I had a sandwich in a bar with a few other old men. Driving back to our lodgings we met literally hundreds of preserved war-time vehicles from all over the western world driven by their proud collector owners. An old Hercules transport flew across and out of it jumped a team of American paratroopers, some in their 80s. All had jumped there 50 years before ! Vera and a friend were staying with us and we all had a good dinner that night.

Any information about the fourth member of the crew F/Sgt Joseph or about any of the men from 13th Parachute Battalion or Royal Ulster Rifles who travelled in KG 355 would be very welcome.

Your thoughts on this site